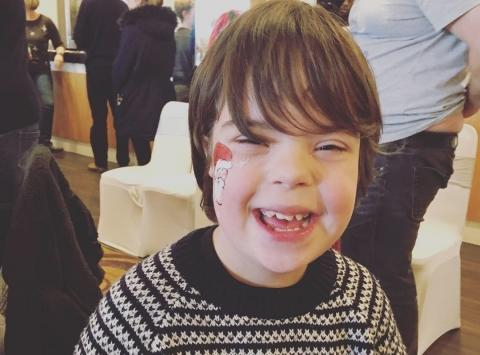 We were so excited to be having our first child together and Jacob arrived on 15th December 2010 -  2 and half weeks early!  Jacob was the cutest little thing and we were proud parents of a 7lb baby boy who looked so squidgy the nickname stuck.  A few hours after Jacob’s arrival the midwife told me that she was worried about his breathing and that she wanted him monitored.  Jacob was taken to the special care baby unit in Northampton and stayed there for the next 10 days due to having Pneumonia.

Later that day we were advised that a doctor wanted to talk to us, and we feared the worst.  We were taken to a small room (tissues on the table) and the doctor holding a model of a heart.  The Doctor told us that he thought Jacob has Downs Syndrome and the rest of the words are muffled!  My first question was ‘how long have we got him for?’  The way in which he was talking about the heart I thought he was going to die.    Rob and I gripped hands and sobbed as we didn’t know what this meant, it was such a shock.  We were not expecting this news nor knew anything about Downs Syndrome (DS).

Jacob’s diagnosis of his condition was confirmed when he was 3 days old.  We went through an emotional rollercoaster of not knowing what to expect and finding support from other parents.  We realised and understood quite quickly that Jacob was Jacob, our baby, our little Squidge, and that’s what we wanted, that’s why we wanted to be parents; to love, care and support our child through life’s journey, we perhaps just had to prepare ourselves a little earlier.

I decided not to read up on anything about DS, I just wanted to be a Mum to Jacob and would deal with anything that came along as it arose, not looking too far into the future meant I could deal with the here and now and Jacob not what ‘could’ be – that is my way.  I mentally had to say goodbye to the child we thought we were having but Jacob is 10000 times more than we could have ever imagined and fulfils our hearts with so much love and laughter.

We compared Jacobs age and ability at 12 months and saddened us again, but it was another part of our journey , and asked ourselves ‘why we do that’.  Jacob is Jacob and why did we want him to be like any other child, as he isn’t, he’s ours!

My saddest moments where waiting for a smile, it seemed like forever but I tell you, it was worth it!

We have many medical appointments; Jacob has mild hearing loss, and reoccurring chest infections but we are not the only parents, and you do what you do for the health of your child!  We are fortunate to have known from the outset about Jacob’s condition and medical factors related to DS.  Jacob has regular check-up appointments and tests for associated medical issues.  I know some parents who are frustrated for not knowing what their child’s condition is – so we are very fortunate to have the support from Specialists and that there is more research out there about Downs Syndrome (although perhaps not enough still!)

Jacob is at his 2nd Pre-School where inclusion is embraced and he has flourished with their expertise and support. The main reason is that they continue the Makaton and other speech and language communication at the setting as we do at home.  Jacob verbalised 2 weeks after being there!  We are also looking forward to starting School in September……where did that time go?  The mainstream school we hope Jacob will go is already starting to make contact with support networks to ensure there is support in place well before he starts!

Being a parent to a child with a Learning Disability is very rewarding, no mile stone gets missed and although it may take longer to get there, the sense of achievement is overwhelming.  Jacob has strengthened us a couple, we are more understanding and patient than I imagined we would be and deepens our want to be parents.  You get out what you put in!   There are tough times still, but having a support network is key to be able to talk about situations, behaviours, mile stones, new ways of thinking and playing, but also remembering, that Downs Syndrome is only part of Jacobs genetic make-up and still has the usual tantrums, gets frustrated and giggles when something is funny, but most of all enjoys playing football and being outside – Jacob thinks and has feelings like any other child I know!