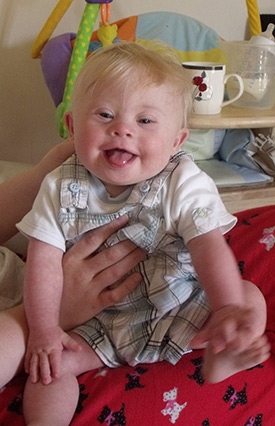 Our names are Richard, Nicole, Abigail and Oliver.

Abigail is Nicole’s first child and she is 3 and a half years old, she is a little live wire. Then we have Oliver. He is our first child together. He is a beautiful little boy who has Down’s syndrome.

Nicole’s pregnancy with Oliver’s was normal; we had all of the tests apart form the nuchal translucency screen as the hospital took forever to get us a scan and we missed out by a couple of days. All of the results came back normal and low risk.

As we are both relatively young parents, (Nicole, 22 and Richard, 26) we never anticipated having a child with Down’s syndrome. We both thought that it was a hereditary condition and happened in older parents. Also with all of the results we had, it never even crossed our minds.

The moment you hear those words it’s as if your heart breaks instantly. That perfect moment of meeting your child ruined. We were lost and alone.

Oliver was born on Friday 5th February 2010, weighing 8lb 1oz. As it was a Friday night we were not able to get a firm diagnosis until the following Wednesday; practically a week of not knowing. The longest five days of our lives, by far. During those five days there were lots of tears, not knowing what to say or what do and no one to turn to for advice. When we finally got confirmation, it was like our lives had been turned upside down. We were upset and angry too I suppose. Lots of things went through our heads “Why us?” “What had we done wrong?” Richard blamed himself quite a lot. He believed it was his fault as I already had a “normal child” But now we know it was just one of those things.

In the beginning we only told family as we were finding it hard to come to terms with it. Gradually we told friends and we were pleasantly surprised by their reactions. We thought people would treat us differently but many had no idea about Down’s syndrome and were just curious as to what Down’s syndrome was and how it may affect Ollie. We have just told people that he was no different to anyone else and he may need a little bit of extra help.

Oliver has been very lucky so far with his health. He has no problems with his heart, eyes, ears or any other part of him for that matter. He is just a very happy and contented little boy.

Oliver is now 7 months old and has the cheekiest little smile and chuckle. He surprises us everyday doing new things. He loves his big sister most and they play together beautifully. She wants to teach him everything – Abbie being only 3 has no idea that there is anything different about her baby brother but I’m sure even if she did she wouldn’t treat him and differently.

We are very proud parents and wouldn’t change Oliver for the world. We don’t think of Ollie having Down’s syndrome anymore; it is just a tiny insignificant detail. He is our gorgeous little boy first and foremost and him having Down’s syndrome is a very distant second. We now look forward to the future and aim to do the best for our children so they can meet all their milestones.

We have learned a lot in the past few months and have a lot more to learn still. We hope to help more people understand what Down’s syndrome is and raise awareness in the future.