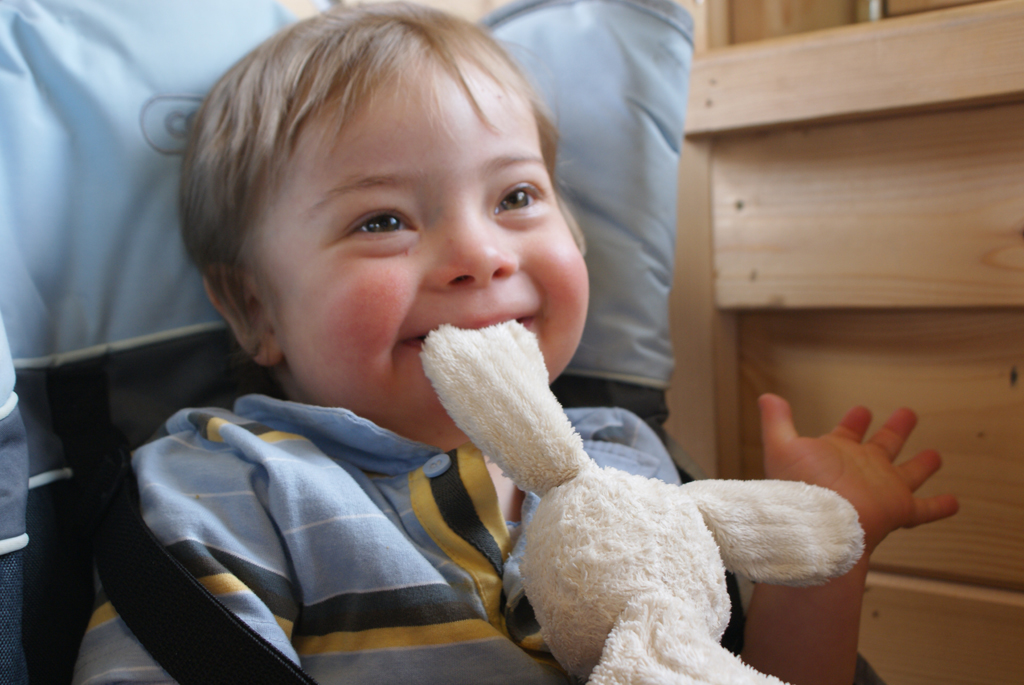 My name is Luca Roberto and I was born two weeks early on the 19th February 2006.

Like every hot-blooded Italian worth his salt I burst into this world following a spicy bowl of spaghetti (enjoyed by my mother) and a high speed car chase involving the police to the hospital (enjoyed by my father).

To be honest, I was desperate to get out sooner but my mum says she really kept her legs very, very, very crossed. It must have worked because when I was born the lights in the delivery room had only just been turned on! The first thing I experienced was my mummy who cuddled me and was crying with joy as was my father (who had also enjoying too much of something the adults call ‘gas-and-air’). I think they couldn’t believe their luck because I was just so good-looking (if a little temperamental!).

I don’t believe they knew I had Down’s syndrome until a few days later but they suspected something was up because there was much whispering and they said it was nothing like when my angel of a sister Alessia was born almost 6 years ago now.

At this point I had, to be honest, felt that all this excitement was often getting the better of me, making me breathless and I was getting more and more tired trying to breastfeed. I just wanted to sleep.

Sometimes it felt like my parents looked at me as if I had Down’s syndrome regardless of my sparkling personality. It took them some time to see Luca first (aren’t adults slow!!!) but now I know they’ve come to the conclusion that I am their lovely second child and that’s it.
Although the doctors sent me home I still struggled and, eventually, things got so bad for me that I was rushed to a specialist hospital in Leicester.

Turns out that the docs did a few scans on my ‘ticker’ and found that I had something called a complete AVSD – Atrioventricular Septal Defect – Basically, it meant that I had a very big hole in my heart and that I wasn’t very well at all. This is something that is relatively common in people with Down’s syndrome.

I was admitted to the hostipal and had corrective surgery to my heart to help me put on weight in view of a more full-on operation when I was a little bigger.

As I felt so tired all the time the doctors thought it would be a good idea to feed me via a naso-gastric tube which went down my nose into my tummy. It really cramped my style so I pulled the tube out all the time. Thankfully, for my parents, the local nurses were lovely and helped by putting the tube down again but I was less than happy at the time!

Later, I had full open-heart surgery and it took me a while to recover because the hole in my heart was bigger than expected.

The operations were hard for me and I spent quite some time in intensive care. They really looked after me and I think I really learned what Love means there. The nurses, doctors, play therapists and general staff really cared and I knew my mummy, daddy and elder sister were there for me all the time.

In the end I decided I was ready to go home and I did!

Well, I’m learning to walk, talk, sing and create a huge amount of destruction everywhere I go!  I might be doing it all slightly later than my sister but I’m getting there and doesn’t everyone just know it!

My Mummy, Daddy and big sister Alessia love me and look after me all the time but still can’t keep up with all the antics I get up to!  I’ve now started pre-school two mornings a week and I absolutely love it. I was beginning to get a bit bored at home and there is so much to do and explore in this new world.  I’m enjoying myself and taking pleasure in discovering the delights of the world.

Addendum by the parents:

Clearly, Luca didn’t write this and we don’t know how Luca feels but we do know how he reacts to us and how he always engages vigorously with everyone around him. He loves to play, to learn, to explore and, with it, to smile, to laugh and to love. Just like his sister, Alessia, yet unique.

He’s a fighter too.

Luca and Alessia have given us so much. If we give them back only a little of what they have given us, they’ll be happy.