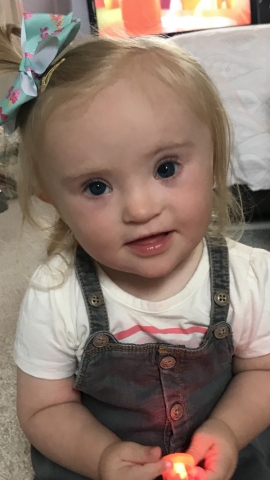 Thank you for visiting the UpsnDowns website and thank you for taking time to read Elsie’s story.

My wife Leanne and I found out at our 12-week scan that there was a problem with our baby, the nuchal translucency measurement which measures the fluid space at the back of the neck was 9mm rather than the expected 1-2mm.

We were taken to a small room and handed various leaflets about the possible reasons behind this, all of which related to chromosome issues.  The documentation was very factual and the lady who was speaking to us gave us lots of information.

We both felt numb. Only minutes before we were on cloud nine thinking we were going to see our baby for the first time and there we were sitting in a room being told that our baby, if diagnosed with one of the potential chromosome related problems, may not survive.

I remember the lady in the room saying we didn’t look very happy and that we were being a little abrupt with her, I can’t believe we managed to keep our cool when explaining the reason behind our reaction.

After an amniocentesis it was confirmed our baby had Down’s syndrome.

The remaining weeks of the pregnancy involved bi-weekly growth scans and a heart scan. On top of this, there was a lack of baby’s movement, all resulting in a very stressful pregnancy.

Elsie was born April 3rd, 2017, a good weight and immediately stole Mummy and Daddy’s heart. Her older siblings fell in love with her immediately.

Elsie failed the hearing test after birth, but as this was relatively common in babies with Down’s syndrome, we weren’t overly concerned.  After a couple of days in hospital, whilst they helped her temperature regulate and treat her jaundice, Elsie was home.

Over the next few weeks we started noticing Elsie’s eyes were cloudy. It was later confirmed that she had bi-lateral cataracts that needed to be removed. By the time she had reached three months she’d had both eyes operated on at Birmingham Children’s Hospital and was wearing contact lenses, hugely un-common for a baby. Mummy and Daddy had to learn how to put lenses in and out.

Elsie’s hearing tests showed that she had moderate to severe hearing loss. In December 2018, Elsie had a specialist Ponto bone anchored hearing system fitted at Leicester Royal Infirmary. This hearing aid is making a significant difference to Elsie already.

Elsie loves lights and anything that moves, she loves picking things up and banging them together, loves cuddles and because of some of the UpsnDowns funded classes, she has a very busy social life.  Thanks to UpsnDowns, Elsie utilises speech and language therapy, ‘sing and sign’ and swimming lessons.  These are all invaluable to Elsie’s development.

My advice would be to accept that the standard milestones such as sitting up, crawling, talking etc, will take time to achieve.  Don’t put pressure on your child or yourself if another child of a similar age is doing things your child isn’t.

Elsie has a loving home and family network, everyone asks about her, everyone wants to see photos, and everybody wants a cuddle.

She has completed our family and we can’t wait to see her flourish.