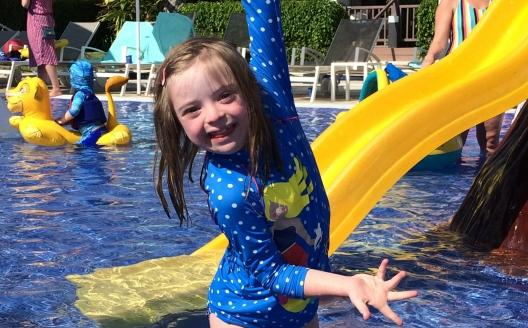 The first 4 years of life with a child with Downs Syndrome … a tale of two halves, Isabella’s story so far!

Kim and I had Izzy in August 2010, a perfectly normal, if a tad chaotic, home birth in Woodford, Northants.

An hour later, Izzy started deteriorating and we sped off to Kettering General Hospital. 24 hours later, she had had a full blood transfusion, she was in serious heart failure, and they suspected she had Downs Syndrome. Our new life as parents started in intensive care, and probably lasted there for the next 6-9 months, it was all a massive blur... our recollection of it still is today.

How could we have had a child with DS, we were devastated…

Why was she in NICU in cardiac failure and being fed through her nose via an NG tube?

This was not how it was meant to be…

The heart surgery came and went, there were numerous complications with further surgery and we spent Xmas 2010 on a children’s ward with other pretty distraught parents. Being busted by matron on the children’s ward with a sneaky beer on Xmas day was my only vice and moment of happiness that day! I recall being told “You don’t know how strong you are until being strong is your only option left!” a simple phrase but it summed up our predicament. It was the hardest thing we had ever faced, and very nearly broke me.

I promised a tale of two halves… and all I see today is a beautiful, very bright and bullet proof little girl, I rarely see Izzy with DS as we often used to. Izzy continues to amaze us day by day and push the perceived barriers to what a child with DS can or be told they cannot achieve. We don’t know what she will achieve or become, but we no longer limit our expectations, the future is her's to enjoy… She loves swimming, playing, walking the dogs, pantomimes, Richard’s playground i.e. ‘Upsndowns’ fitness classes, reading, parties and the inevitable coffee and cake (thanks Mum!)

She now has a beautiful little sister, Lucy and the battles of every day sibling life have already started. Izzy started at Oundle Primary School last September 2014, where she has excelled, surpassing both our expectations and even taking an active part in the School’s nativity as a dancing Angel in front of hundreds of parents – especially two very proud parents.

She loves going to school, she has a wonderful circle of little friends that all look out for her as she’s the youngest in the year too – it’s a tough gig! She also apparently to my surprise has a boyfriend and has been asked out to play, however he has yet to impress me, but even I accept he is only 4 so there is time!

‘Ups n Downs’ opened up a whole new world for Kim and me, with support when we needed it and space when we did not, and a group of experienced parents to advise us on our future challenges, which they had already encountered and overcome. The ability to share our experiences and contacts for example, from Speech & Language and Physiotherapy to interviewing School Teaching Assistants has been vital in developing all our knowledge and supporting the group as it continues to grow.

The odd Charity golf game has also brought some well-deserved ‘Daddy’ R&R away from our wonderful children on the odd day!